2020 transportation outlook and what it means for your business

To provide an outlook on 2020’s freight market, we begin by examining the macroeconomy and then drill down into the transportation industry.

From a macroeconomic standpoint, GDP, which is the biggest outcome metric of the health of the economy, on the U.S. side is projected to be in the 2.3 to 2.6 percent range in 2019. Projections for 2020 are in the 1.8 to 2 percent range. It’s not phenomenal growth, but it’s still growth.

There are two things to look at when looking at the U.S. economy. Is it a matter of economic sluggishness or is it an imbalance? At this point, it appears to be imbalanced in the sense the consumer side of the economy seems to be strong and a lot of the fundamentals we watch are positive, but the business side, the durable goods and the industrial manufacturing side seem to be where the softness is. 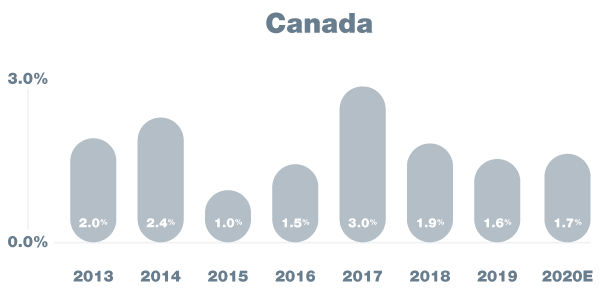 Let’s compare the U.S. economy against some other economies. We’ll use Canada and the Eurozone in this example. When you look at Canada, they’re pretty stable. They have the same dichotomy in their economy. They are stronger on the consumer side, but not as strong on the industrial side, with a flatness of sorts in natural resources and oil production. 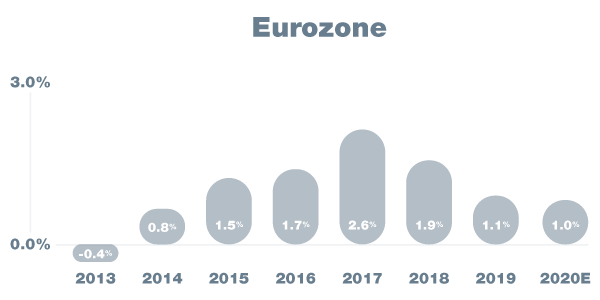 When you compare the U.S. to the Eurozone, many of those economies are struggling with debt and productivity issues. As a whole, the Eurozone is predicting only one percent growth in 2020. This still makes the U.S., even if we are softer than we want to be in terms of GDP growth, a good alternative for investment.

We didn’t include China in this graphic as it is difficult to get GDP information on them. If you look at what has been reported over time, China is on a six-year slide with its GDP. Six years ago, their GDP numbers were above seven percent growth per year. They are forecasting 5.2 to 5.4 percent growth in 2020. They have certainly seen a slowdown as they try to re-engineer their economy.

The point of all of this at the macro level is there certainly appears to be a slowdown on a global basis. It appears the U.S. is in a better position than most other countries to deal with that slowdown. It comes down to whether the gridlock we have in Washington, D.C., regardless of your political leanings, will change that for the negative. We have yet to see the types of things that could stimulate our economy coming out of Washington, D.C., like an infrastructure bill or a deal on immigration. They’ve been consumed by other political issues.

That said, that’s why we’re seeing things pretty “flat” from a GDP growth perspective into 2020.

Shifting down a level from the macro picture, this will go further down into the imbalance in the U.S. economy.

Unemployment is at a 50-year low in the U.S. Wage inflation is creeping up. Basically, more people are back to work and have more money in their pockets.

Housing starts is another metric to watch closely. When housing starts are above 1.1 million starts per month, that generally signals decent growth and activity in the U.S. economy.

You can see we’ve been above that mark for several quarters and projections into 2020 show we’ll stay in that 1.25 to 1.3 million starts per month range.

All in all, the fundamentals of the consumer side, which drives nearly 70 percent of the U.S. GDP, appears strong.

So what does the business and durable goods side look like?

Both business fixed investments and industrial production hit a peak in 2018 and have certainly come back in 2019. The growth expectations for 2020 are at or below 2019. It’s still growth, but not very robust. There were a lot of things going on in the 2018 timeframe that artificially pushed up 2018.

There was hurricane relief coming off 2017 that devastated Houston, Puerto Rico and other areas. There was also the Tax Cuts and Jobs Act that was signed into law and spurred a lot of fixed assets and investments by many companies.

The ELD mandate was going into effect on the transportation side, which held back capacity and created somewhat of a freight bubble. The tariff discussions, which started in 2018, also contributed to the bubble with many businesses pre-buying raw material inventory, like steel, aluminum and wood products. These factors created some activity in the economy on the industrial side that has since pulled back.
Again, since we haven’t seen anything come out of Washington in the way of an infrastructure bill, as an example, we haven’t replaced that type of economic growth.

So, is the economy slowing? It feels it’s more that the economy is out of balance—strong on the consumer side but sluggish on the business investment side.

Transitioning into the transportation and logistics industry. It doesn’t appear there will be much regulatory change inside of 2020 that will impact the industry. There are a number of things out there, like potentially changing hours of service regulation with split sleeper berth, hair follicle testing, speed limiters and more. Some are up for public comment period, but it doesn’t appear any of them are going to be implemented in 2020.

That being said, we’ll concentrate on the basics inside of supply and demand that will affect transportation. Let me start with the demand side, the goods and services our customers move every day is our freight demand. 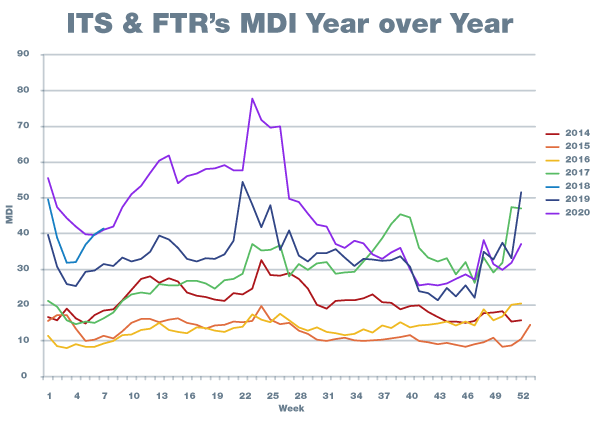 Truckstop.com features its Market Demand Index (MDI) that charts out whether freight is increasing or decreasing year over year. It is one of the better indicators the industry has. What their chart tells me, along with other freight indices like Cass and JP Morgan, is there is a freight recession going on right now.

But is it really a recession or is it just a pullback from the artificially high levels of 2018? It’s difficult to say for sure, but it does feel like a pullback. Either way, less freight is moving. And if there are more trucks in the pipeline than what is needed to move the freight, our customers are going to pay less to have their freight moved. 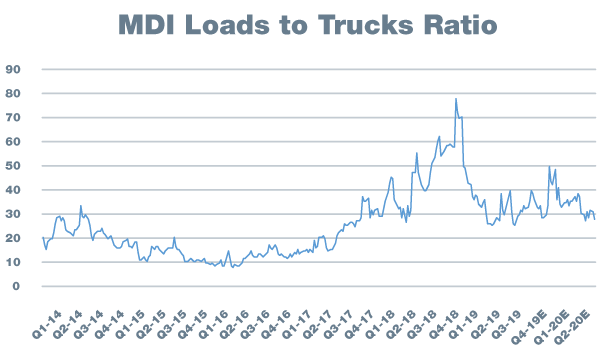 This MDI chart from Truckstop.com is an indicator of the number of loads against the number of trucks. The peak of the graph just tickled 80 loads per truck in the second quarter of 2018 when the spot market was at its highest. As the economic activity has slowed down and spot rates and contract rates came down, there are fewer loads per truck. This is not super scientific, but over my years in transportation, if you are in the 30-40 loads per truck range, the supply of freight and trucks to move it are relatively balanced. That’s about where we are at today.

What it also tells me is the spot market has bottomed out and leveled off. Spot rates appear to be about three to five percent below contract rates in the industry right now.

As supply and demand get back into balance, 2020 will be pretty similar to 2019.

When speaking with customers or vendors on a regular basis to gauge their expectations for rates and looking at some industry material out there, they’re expecting intermodal and LTL to be a little higher and dry van and open deck rates to be relatively flat.

The other thing we have going on is what’s happening with costs in the industry. You’ve heard for several years there is a Driver shortage. There is a shortage of Drivers, but the industry tends to get additional capacity when Driver pay increases to the point where it makes it more attractive to get out of other industries, like construction, and get into the truck.

We certainly saw that in 2018 when the industry needed to increase the wages to attract Drivers. In order for trucking companies to get Drivers, they had to increase their pay. FreightWaves, which is an industry service we watch that provides economic data, is estimating Driver wages went up 11-12 percent over the past two years.

In addition to that is nuclear verdicts. Any time there is an accident involving a truck, regardless of whether it’s the truck’s fault or not, there is potentially a lawsuit that follows. The verdicts that come out of those lawsuits don’t always follow logic, but they create some pretty big verdicts and the insurance industry has started to respond in the last 18 months. A number of parties that ensure the trucking industry have left the industry or are raising their rates in order to cover the verdicts. So while we have the supply and demand issues going on, we also have some cost issues that are driving different behaviors that we haven’t seen in recent years.

The bottom line is we can expect the 2020 economy to look similar to 2019, barring some large geopolitical event. However, the one thing to be concerned with is the possibility of a self-fulfilling prophecy on the U.S. economy. We are headed into an election year. The news reported tends to get more negative in an election year. While the fundamentals on the consumer side are very strong, an economist from a public accounting firm was tracking activity on the YELP app, which measures consumer behavior, against tariff information in the news. Whenever there was a spike in tariff information in the news, the YELP activity went down. A funny, quirky fact, sure. But it makes you wonder. Will people listening to all the negative news this next year change their spending and buying patterns and could that be a self-fulfilling prophecy to slow down our economic activity?

It’s hard to say, but it does raise some concern looking forward to 2020.