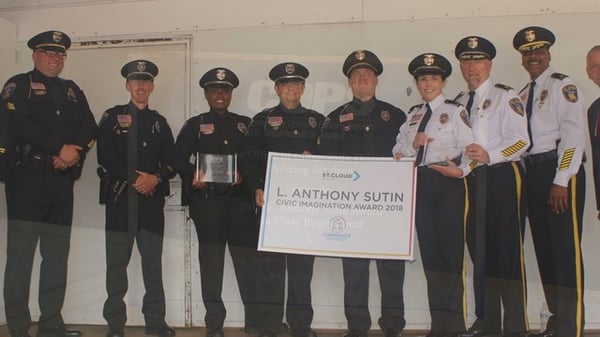 In August of 2017, the City of St. Cloud (MN) and the St. Cloud Police Department officially opened what they call the Community OutPost, or COP House. The outpost was created to help police officers positively engage with members of the community as a way to strengthen relationships. It was inspired by a similar program in Racine, Wisconsin.

The first-of-its-kind house in Minnesota has been a hub of community activities since it opened roughly two years ago, providing programming focused on safety, wellness and more. ATS is proud to have provided financial assistance to kick-start the Community OutPost. The hard work paid off too.

The City of St. Cloud and the police department were named the recipients of the 2018 United States Department of Justice L. Anthony Sutin Civic Imagination Award for their collaborative effort to create the COP House. They are one of two cities across the country to receive the award, with the other going to the Charlotte-Mecklenburg Police Department and their work with the Promise Youth Development Program.

The award is named in memory of Tony Sutin, who served as a founder and deputy director of the COPS Office from its creation in 1994 until 1996 when he became the principal deputy to the associate attorney general of the United States. It is awarded to a team of law enforcement and community members whose innovations have transformed public safety and led to violent crime reduction in their community.