The Real Heart of ATS - Thaddieus 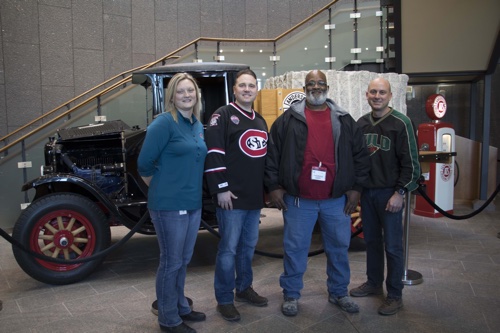 We know there is more to trucking than just the load and the road. Our Drivers frequently go above and beyond for motorists they encounter on the road, and we love to share their stories. We received a letter commending one of our Drivers whose actions made a lasting impression on them. Thank you, Thaddieus S., for making us proud!

On December 31, 2017, Thaddieus was traveling through the Asheville, NC, area during an unexpected winter storm, which was causing accidents and stranding motorists along Interstate 26 for hours. Valerie was traveling back from Asheville with her two daughters, ages 9 and 12, and nieces, ages 13 and 14, and ended
up stuck in traffic near Thaddieus’ parked semi.

She wrote a letter, sharing her experience with Thaddieus. Here is an excerpt:

“Traffic was snarled across the area and we finally came to a prolonged stop next to [Thaddieus’] truck on I-26 East. He had pulled off to the right of the interstate for safety about 100 yards shy of the Blue Ridge Parkway overpass. At this time, we could find no updates from the NCDOT, law enforcement or new sources in the area
as to why the interstate was not moving or whether the road would be safe to drive eastbound to and beyond the Asheville airport toward Spartanburg. The snow was piling up, the roads were becoming more slippery and we were stranded on the interstate with no way to move forward. We were panicked, and all four girls were
crying from stress and fear.

“I approached [Thaddieus’] truck and knocked on the window to ask for help. He was very professional, kind and reassuring. He took my phone number and offered updates as they came in through his radio from other truckers.

It is only because of [Thaddieus’] constant updates and reassurance that a wreck had shut the interstate and it would re-open once the wreck was cleared that we were not overwhelmingly panicked and the children traumatized beyond reason. Had he not actively and constantly shared information, we may have tried to exit and sleep in the car overnight since we had limited fuel.”