The Story Behind the Decal

Ron S. is a man who doesn’t like to gloat about being a Veteran, but he’s definitely proud of his eight years of service in the Army. That’s why he didn’t waste any time to add his military decal to his new ATS tractor, having it put on before transporting his first load.

Another Driver who wanted his background known is a proud Army Aviation Veteran. Mike R., Sr. served for more than 20 years and was deployed for nearly half of that time. When the military decal came around, Mike knew it was something he wanted on his truck.

“It’s really nice, especially when you find out the customers were a Veteran, or a father or a mother,” Mike said. “It’s really cool because then you can get that conversation going.”

He said it’s a simple way to create a personal connection.

They are just a couple of the many Veterans sitting behind the wheel of an ATS tractor or behind a desk at the St. Cloud corporate office or one of the branch offices.
Vice President of Driver Recruiting, Joe G., who served ten years in the Army himself, didn’t think enough was being done to honor those with military backgrounds. That’s why he came up with the idea of a decal exclusively for our Drivers who have served or are currently serving our country. After receiving several concepts, one was chosen that symbolized all branches of the military and meshed well with the ATS logo on the tractors. 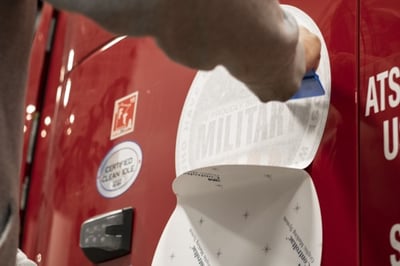 “We wanted something that Drivers would be proud to put on their truck,” Joe said.

As a way to distinguish Drivers, the decal is currently restricted to those who have served or are still serving. Each Driver that qualifies is provided one sticker. It is placed on the Driver’s side because ATS trucks are typically in the right lane, which allows the decal to be seen more often.