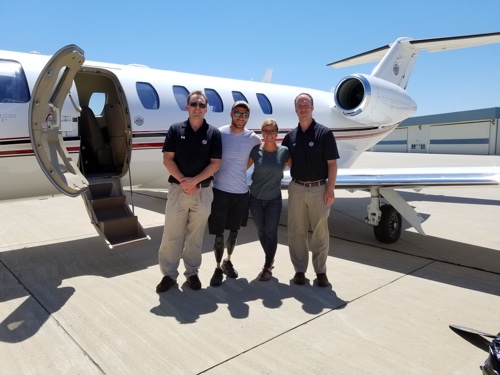 On July 7, ATS had the privilege to fly Navy EOD Technician, Taylor Morris and his wife, Danielle, back from a medical retreat in Maine to Waterloo, IA.

ATS is an annual contributor to donating a flight for the Veterans Airlift Command (VAC). ATS was happy to assist in completing the flight for the veteran who requires special care as a result of his military injuries.

Morris became a quadruple amputee when his vehicle was struck by an IED on May 3, 2012. Taylor remained conscious and continued to give orders to his team to ensure their safety.

Taylor’s then girlfriend, Danielle, stayed with him during his entire recovery. When he finally moved on from the hospital setting he proposed to Danielle. They have been married over a year now.

Taylor and Danielle attended the Travis Mills Foundation Retreat in Maine. Travis is a fellow quad amputee and friend. They attended with seven other families they met at Walter Reed. They all participated in adaptive sports, relaxation and much more.

The VAC provides free air transportation to post-9/11 wounded combat veterans and their families for medical and other compassionate purposes through a national network of volunteer aircraft owners and pilots.