Fagen was managing a project to convert a liquefied natural gas (LNG) plant in Hugoton, Kansas, into a diesel refinery and required various pieces — big and small — to be delivered to the site.

A variety of smaller components were coming from Italy along with a massive piece, known as the tube bundle. There were also two large pieces — a combustion chamber and a flue gas vessel — that needed to be shipped out of India.

Fagen initially called their established contact at Anderson Trucking Service (ATS), who specializes in project freight. Once learning the scope of work that was needed internationally, their original point of contact transitioned Fagen to an international shipping expert. Once ATS International was awarded the project, with plans to first pick up the cargo in January 2021, planning began right away in July 2020.

The contractor’s single point of contact for this project collaborated with members of ATS’ in-house project management team to find the best solutions both domestically and abroad.

Initially, plans called for heavy haul over-the-road service to pick up the larger components in Houston and deliver them to Kansas, but further research found using heavy rail service would help Fagan reduce U.S. shipping costs by about one-third.

Two pieces came from India, including the 260,000-pound combustion chamber, which involved roughly seven weeks of planning before the move ever began. The planning included a route survey to ensure the bridges were safe between the origin city in the state of Gujarat and the port city of Mumbai.

Planners also had to work around restrictions that only allowed travel to happen at night — which meant traveling only five miles on some nights. In the end, it took roughly two weeks to travel the 680 kilometers (approximately 422 miles).

Established Relationships Help Find the Right Solution for the Customer

ATS International was established more than a quarter-century ago and has spent the past several decades creating quality relationships with land and ocean carriers across the world. These relationships proved vital for this project.

The first partnership involved finding a ground transportation company that could haul two large pieces, including a flue gas vessel and the massive combustion chamber. The other challenge was transporting the large pieces hundreds of kilometers down the west coast of India — and through the country’s most populated city.

Once the large pieces arrived at Mumbai Port Trust, they were loaded to a heavy-lift ConRo vessel — a ship designed to handle both containerized and Roll-on/Roll-off (Ro/Ro) cargoes — using the vessel's heavy-lift cranes.

For the smaller components, other liner service carriers — or carriers that operate on set schedules in set trade routes — were utilized as well.

In addition to providing Fagen with the most economical options, liner service also provided a more detailed schedule as to when the units could be expected to arrive at the Port of Houston. This was crucial information that allowed Fagen to forecast and plan for arrival at the final destination.

"It saved us money in the process."

“With a project as big as this one, we were grateful that ATS International found solutions that not only gave us a better idea of when to expect our pieces, but it saved us money in the process,” said Fagen Vice President & Procurement Manager, Amy Johnson.

The vessel ATS International booked featured a crane onboard and underdeck storage. This allowed for smoother loading and discharging of the large cargo. After sailing out of Mumbai in early January, the vessel arrived in Houston, Texas in late April.

Another cost-saving measure for Fagen was utilizing rail service in the U.S. instead of transporting the cargo on a truck. The cargo was able to be directly discharged from the vessel straight to the heavy-lift rail car in the Port of Houston. To avoid bridges and tunnels, the cargo made a roughly 1,000-mile trek to Hugoton, where it was directly discharged at the job site.

“It feels like we have a transportation partner that has our best interest in mind,” Johnson said. “Even though they’re part of an organization with assets spread throughout the U.S., they used a rail service because it made the most sense for our needs.” 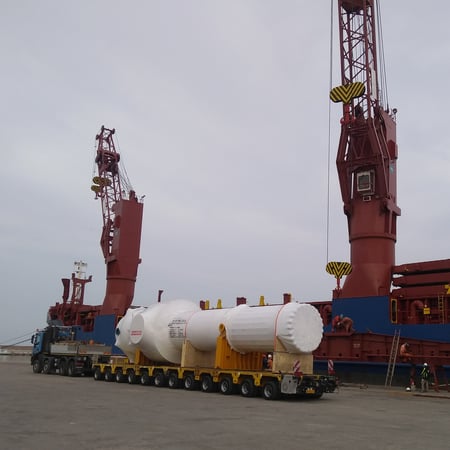 Although it had a shorter distance to travel to get to Port Ortona, only coming from Chieti, ATS International still utilized an established relationship with a carrier in Italy to safely deliver the tube bundles to the port.

Because Port Ortona isn’t a major port, ATS International needed to arrange for part-charter service. Charter vessels usually carry breakbulk cargoes and have no fixed route or itinerary, which allows them to be available on short notice. In this case, the ocean carrier stopped in Ortona specifically for Fagen’s project cargo.

The tube bundles set sail out of Italy in early March and arrived in Houston in mid-April. Once in Houston, they took a similar route to Hugoton.

However, due to the extreme width of this piece, the rail portion of this project had to be facilitated using a special car because it was too wide to be transported by regular rail service.

In this instance, ATS International secured one locomotive car assigned specifically to the piece. Much like how the unit moved over the ocean as a charter service, the rail portion of the move was made up of three cars in total, including the locomotive, an empty rail car and an eight-axle heavy-lift rail car with the tube bundle on it.

“This gave us the peace of mind to focus on the other projects we were working on.” 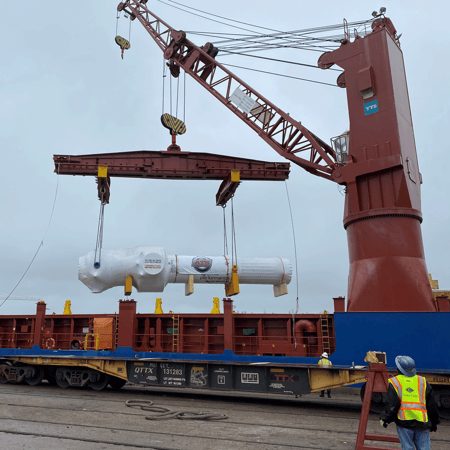 “All we did was tell ATS International what we needed to transport, where it was coming from and where we needed it and they took care of the rest,” Johnson said. “This gave us the peace of mind to focus on the other projects we were working on.”

It’s not very often that someone needs the unique combination of project cargo that includes overweight and over-dimensional pieces coming from different countries to be moved across the ocean — so options were limited on how to transport them.

The established relationships and meticulous planning proved vital in the execution of the project cargo. Even though the planning and shipping process took nearly a year, it was vital for ATS International to stay in tune with all the moving parts across the world.

With so many things happening simultaneously, it was important to keep several steps (and days) ahead of the shipments to predict potential challenges and plan accordingly.

Those potential challenges and delays were constantly communicated with Fagen to ensure they could plan their Kansas project accordingly. That way, Fagen didn’t have crews waiting on parts that may still be several days or weeks out due to delays on the ocean.

The work behind the scenes proved essential to provide Fagen the peace of mind that allowed them to focus on their dozens of other ongoing projects across the U.S.

A Project Cargo Partner With Your Interests in Mind

If you're looking for a partner that puts your needs in front of theirs, we'd love to help. We're here for all your project cargo needs.

Whether you’re moving one component or major project cargo, ATS International has the resources necessary to get the job done. Whether your project cargo needs full charter, part charter or liner service, we’ll ensure it’s paired with the right vessel to get to its destination on time.