What is a Bill of Lading (BOL) In Freight Shipping?

Whether you’re new to shipping freight and have heard the term “bill of lading” thrown around in reference to your shipments, or a seasoned logistics veteran the BOL is important to understand.

You know that this is an important piece of the freight shipping process but just aren’t sure how the BOL is used, whether it’s important to understand or how frequently it should be updated.

It can be really frustrating when you feel like you only know half of the information, especially when it comes to moving inventories.

Here at ATS, we’ve been working in the freight shipping industry for well over half a century, during this time we’ve worked with shippers, carriers and consignees on their bill of ladings every day. For this reason, we understand these documents, the role they play in the transportation industry and how vital they truly are when it comes to successfully moving freight.

In this article, we’ll break down:

At its conclusion, this blog will leave you with a far better understanding of how this document makes an impact on the lives of all stakeholders in this industry and how you should use it to benefit yours. 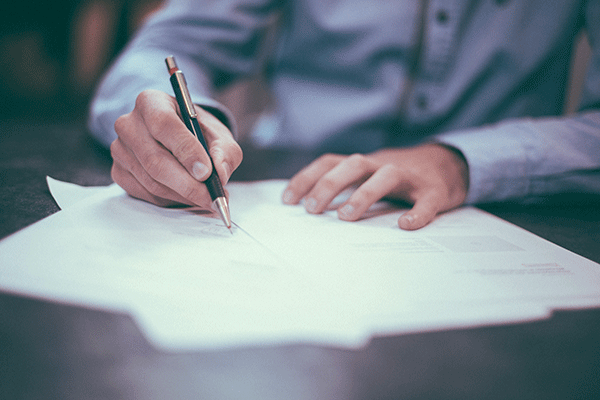 What is a Bill of Lading (BOL)?

The bill of lading (BOL) is a legally binding document that’s responsible for recording the key aspects of a freight’s transit, including but not limited to:

The BOL form serves as a clean, easily reference-able, chain-of-custody for a shipment from point A to B, holding all parties accountable to do their part in ensuring the successful transportation of freight. 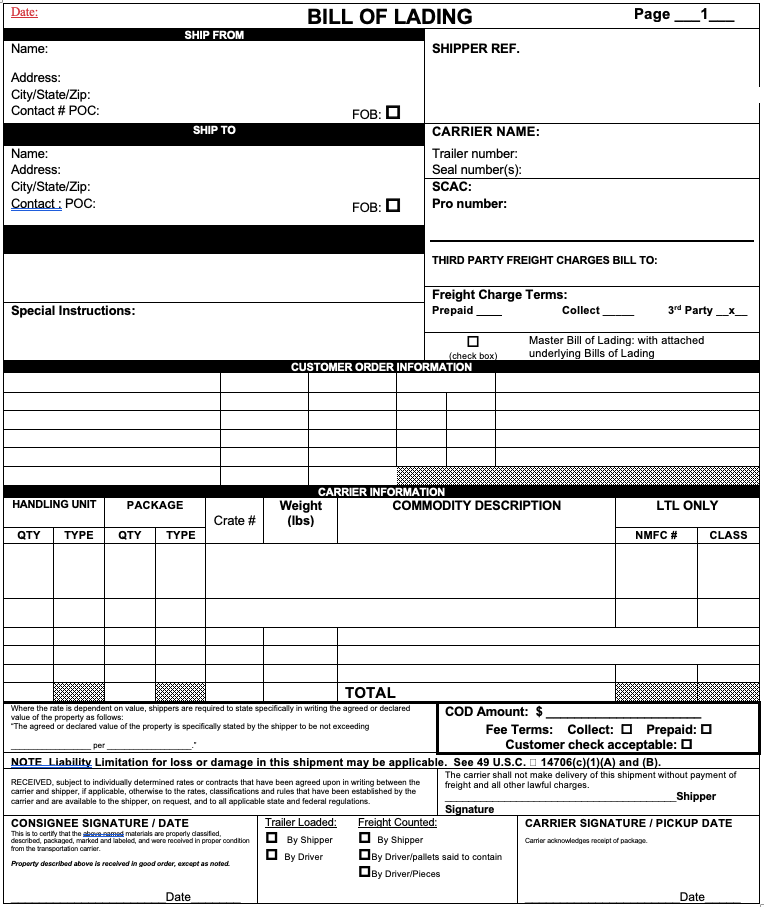 What’s The History of The Bill of Lading?

The bill of lading can be traced as far back as the 13th century when shipping and cargo manifests were first adopted. It was during this period — when merchants stopped traveling with their goods — that shippers, carriers and consignees began to recognize the need for a written agreement documenting the transport of freight from point A to B.

Although it’s difficult to say for certain, it’s believed the first document that resembles our modern-day BOL was drafted, and employed, in 1564 Italy. In those times — and throughout the 11th-19th centuries — the goods transported across the Mediterranean Sea and into medieval port cities bolstered their economies.

Back then, the BOL served to do three things:

In essence, these documents were used to signify the shipper’s verification that all goods were “shipped in good order” when they entered the ship’s cargo hold and as a method to ensure that the shipmaster — the person in charge of transporting the goods — kept them that way.

Here's a photo of a bill of lading dating back to 1802. This BOL was drafted to record the receipt of “One Trunk” from New York City to the port of Georgetown with Secretary of State James Madison listed as the consignee. 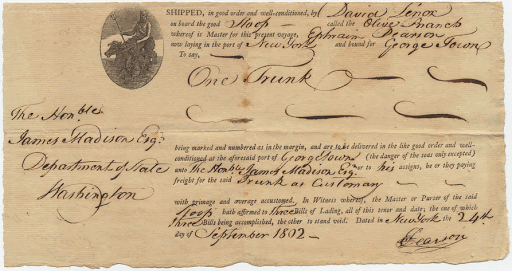 As you can see, the bill of lading is a document that has been central to the shipment of goods from port city to port city, in some form or another, for centuries. It’s touched the lives of monarchs, founding fathers and every single business since its initial adoption in the 13th century.

Today, the BOL functions in many of the same ways as always and is an integral cog in today’s transportation industry as it supports the world’s economy year after year.

Why is The Bill of Lading Important When Shipping Freight?

No load can be transported without the proper bill of lading associated with it. Not only does the bill of lading create a record of the freight’s condition, quantity, starting point and destination, but the BOL also serves three key functions that promote its necessity to this process further.

The Method For Paying Drivers (Proof of Delivery)

The trucker, following the delivery of a load, must present the bill of lading to whoever’s in charge of paying for his services. This proof of delivery, complete with signatures from all parties, serves as a receipt verifying that a shipment was delivered and the trucker’s responsibility to that shipment has ended.

Only after a truck driver has submitted his copy of the bill of lading — signed by all stakeholders — is he/she able to receive payment for services rendered.

A Record of The Freight In Transport for Law Enforcement

Whenever a member of law enforcement pulls over a truck driver, be it for a routine road check or another reason, that officer may request to view that shipment’s BOL documentation.

Since drivers are mandated by law to have a functioning BOL, the officer could request access to it. Doing so helps officers verify that this driver is taking the necessary steps to ensure that all governmental rules and regulations are being followed while moving a shipment.

Since keeping a BOL is such a basic and habitual part of the freight transportation process, an officer’s ability to verify that a driver is doing so eases their mind away from searching for further transgressions.

Note: is a member of law enforcement — after examining the BOL — feels they have further cause to search a trucker’s freight and does so, the officer must also sign the bill of lading signifying their presence. This helps to make sure that if any of the freight is damaged during inspection, the liability isn’t placed on the driver. 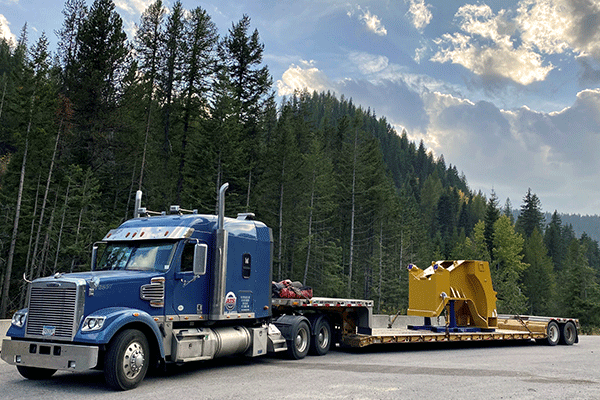 A Record For Cargo Claims

In the trucking industry, cargo claims for concealed or visibly damaged freight can be filed for up to nine months following the freight’s delivery date. To do this though requires a recorded chain of custody stating the condition of a shipment at each checkpoint in its journey.

Since there are three copies of the bill of lading — one for each party involved — these documents should paint a glaringly similar picture about when the damage occurred. Additionally, any time there is damage to freight, the responsible party should have recorded this damage and signed their name signifying their liability accordingly.

Another piece of this is if — upon a shipment’s arrival — the product is found to be short ( with some quantities of the agreed-to shipment missing) if not properly recorded, the trucker is held responsible. As such, carriers must make note of this discrepancy before transporting a shipment so that they’re not held responsible for the lost/missing cargo.

Sometimes, freight is loaded without the truck driver around, this severely limits this driver’s ability to verify that all the product is present and accounted for. In these situations, when a shipper has taken it upon themselves to load and count the shipment, the notation of “shipper’s load and count” should be included on the BOL. This removes the burden from the trucker’s shoulders if the shipment is short when delivered.

In essence, the BOL is a hedge against misinformation about what happened to a missing or damaged shipment.

When done correctly, the BOL will provide a seamless record for parties to reference when filing or disputing liability claims. No party should end up wondering “where did this damage occur?” or “what happened to the rest of my freight?”

The bill of lading is as important as it gets when moving freight. Always remember to keep your bill of lading up to date and, if you notice any discrepancies in a shipment, record and verify them with all stakeholders before taking action to transport a shipment.

If you’re a driver with questions about where your freight should go, reach out to the shipper’s and receiver’s listed point of contact numbers so that you know where the load is going. Always review the BOL thoroughly and voice any concerns while still at the shipper.

If you’re the consignee of a shipment and have questions about damage to your freight, reference the BOL. Are there any mishaps recorded? Was everything approved when that shipment left the shipper? The answers to these questions should be on your BOL upon receipt. Keep your BOL for up to 9 months in case you need to file a cargo claim in the future.

Now that you understand what the BOL is, how it should be used, why it’s important and where it came from, you’re ready for the next step in your freight shipping journey.

As always, please don’t hesitate to reach out with any questions you have about your next freight shipment. We’re always happy to assist in any way we can.

All told, Terry has been with ATS Logistics for over 10 years during which time he's thoroughly enjoyed the relationships, both personal and professional, he's developed. A lifelong staple of this nation's trucking industry, Terry began working in transportation over 32 years ago in 1988.