The Trucking Industry in November 2022: What you should know 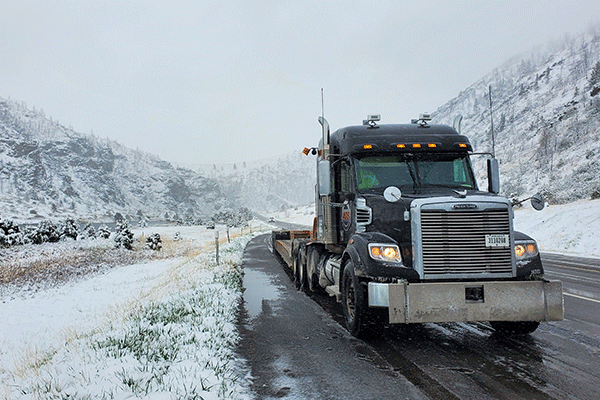 Even if it’s not an election year, November is still an exciting month.

Sure, the leaves that were bright and beautiful during the days of October take on a droopy, more muted, hue. And, granted, without their presence, the trees in northern states are left with a markedly creepy vibe.

But November is still an exciting month. A single lucky turkey gets a presidential pardon, apple cider finds its way into American refrigerators and the jacket you bought during that spring-sellout sale is finally put to use. Why they cut 40 percent from the sticker price, though, you’ll never understand.

Here at ATS, we find November’s impact on the trucking industry to be a welcome challenge year after year.

And, as the gut rot — brought on by those late-night leftover Halloween-candy snack sessions — subsides, our attention turns back to the task at hand; navigating November’s 30 marvelous days incident-free.

You see, we’ve been around long enough to see November’s patterns — like that of a well-worn checkered scarf — for what they are; predictable, comfortable and consistent.

That said, we also recognize that without the benefit of longevity and repeat exposure, it can be difficult for shippers to successfully traverse November’s intricacies.

In this article, we’ll make our expertise yours by giving you an overview of what to expect in the transportation world this month. With this information, avoiding unnecessary price hikes — like paying 40 percent more for that jacket — will be easier.

Below, we’ll cover what to expect this month so that you can make the best decisions for your freight, including:

Listen to the November's Market-Update Podcast!

Discover more Beyond The Road >

How Will Dry Van Trailer Freight Be Impacted in November?

Year after year, month after month, dry van trailers and the drivers pulling them make an impressive impact on nearly every industry. You see, the trucking market’s most versatile equipment type helps companies move everything from food and beverage items to palletized manufacturing commodities.

During November, though, the wherewithal of this nation’s dry van transportation providers is put to the test.

As November progresses and the fervor of the holiday season creeps into American households, businesses begin arming themselves for another uptick in demand.

Beginning in late October and ending as quickly as it began on December 26, the national supply of dry van trailers will be occupied by the heightened consumption of the holiday season.

In November, some asset companies begin dedicating the trailers that would normally be left for your use to eCommerce delivery purposes — lending them to businesses like FedEx and UPS.

Additionally, in anticipation of the wave of consumerism that accompanies the days following Thanksgiving, big-box retailers like Walmart will lean on the resources of dry van trucking companies far and wide.

The capacity these businesses use will shrink what’s available for your company — particularly during the latter stages of November.

As a result, expect to feel a pinch when sourcing for an available dry van trailer this November. The equipment space that was readily awaiting your products in months past won’t be as easy to find during November’s four weeks — certainly not at the same price point. 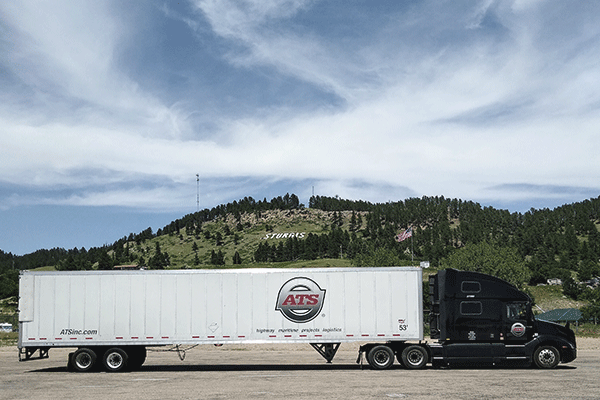 How Will Reefer Freight Be Impacted in November?

During the 335 days of the year that don’t land in November, there’s plenty of demand for the services reefer trailers provide. Whether it’s the continuous refrigeration of raw produce or the protect-from-freeze temperatures needed for pharmaceuticals and other commodities, reefers are used in a wide array of industries.

In November, refrigerated trailers expand their use cases further. You see, during the 11th month, the movement of Christmas trees out of the Northwestern United States ramps up — and does so rapidly.

Getting Christmas trees — a longstanding staple of the holiday season — from the groves of the upper Northwest, and other areas, is a job slated primarily for reefer trailers.

As a result, if you’re a shipper with products that are typically transported in reefer trailers, you might need to pay more for trailer space — particularly in areas where fir trees are grown — this November.

Note, for shorter-haul Christmas tree shipments, dry van trailers may also be utilized, further stunting up the availability of this trailer type in these regions.

How Will Open-Deck Freight See a Change in November?

November is a transitional month across our nation. As retail stores stock up for the holiday season’s arrival and Christmas trees are relocated to American living rooms, open-deck trailer capacities in many states undergo a shift.

The weather starts to rapidly change in most regions of the United States. Though there are still 24 hours in each day, the sunlight hours beg to differ and the wind howls in agreement.

Flatbed, step-deck, lowboy and removable gooseneck trailers aren’t as easy to locate in November compared to other times of the year.

Truck drivers across the U.S., interested in taking their allotted hours of service (HOS) further, and recognizing the heavy uptick in dry van demand, switch the trailers they pull during the four weeks of November.

And as the construction, manufacturing and harvest-season projects that typically keep them busy wrap up, who can blame them? Many Construction contracts reach fulfillment as year-end approaches leaving truckers without nearly as much work to do.

The demand for enclosed trailer space, though, is an entirely different story.

For this reason, putting extra emphasis on lead time when sourcing for open-deck freight capacity will do you good in November. Truck drivers are savvy and although there will be fewer flatbed, step-deck and lowboy shippers to contend with for trailer space, there will also be less trailer space to contend for.

Additionally, the price of open-deck accessorials, like tarping, may rise in November as the temperature drops in many states. Tarping freight is a labor-intensive process that many truckers like to avoid in the best of conditions.

Cold temperatures make this process even more uncomfortable, leaving drivers motivated to charge more to do so. 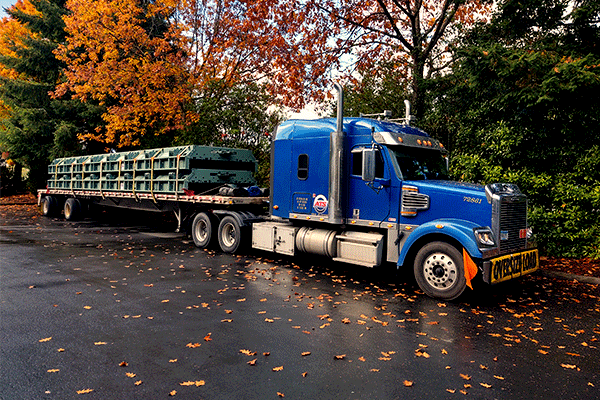 How Will Oversized Freight Movement Be Influenced in November?

The movement of oversized freight in our country takes a seismic dip during November. For two overarching reasons, it gets more difficult to move over-dimensional, overweight and oversized freight along America’s highways.

And, if you’re looking to do so in November, you’ll want to take note of them.

In many counties, towns and states, the movement of oversized loads is only permitted during daylight hours. To keep the motoring public, and the truckers charged with moving them, safe from harm, shipments of some dimensions — restricted sizes vary from one area to the next — can only be transited while the sun is up.

As a result, your timelines may see a shift during November as daylight becomes more fleeting by the hour. Make sure to plan for these intricacies and work with your provider to navigate around them.

By accounting for these restrictions on the font end and understanding how they impact your freight — they may not — you’ll save your timelines and keep your budget intact this month. 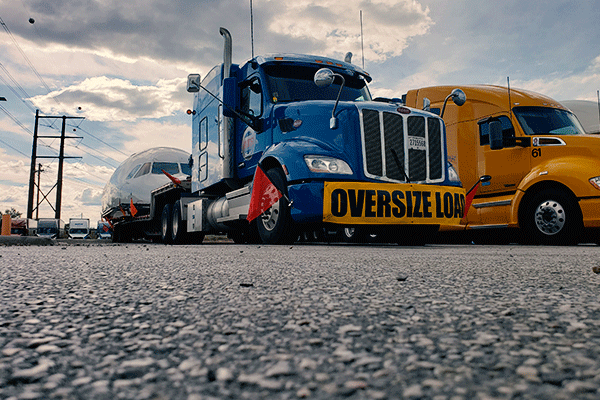 With so many people on the roadways on and around the final Thursday in November, it’s understandable that many city, county and state governments sideline over-dimensional (OD) freight movement during this time.

In fact, Thanksgiving week tends to be the busiest weekend for travel year after year.

Keeping cars moving and highways uncongested is a focal point of National authorities during this time. As such, make sure to plan your OD freight’s transit firmly around the Thanksgiving holiday.

Communicating with consignees and providers to adjust pick-up and drop-off times is crucial this time of year. Be sure to work with companies that are mailable enough to help you avoid potential mishaps like prolonged delays and issues getting permits around the nationwide Thanksgiving break.

How Should You Plan For Thanksgiving This Year?

Over-dimensional products aren’t the only shipments that will feel Thanksgiving’s presence.

The hustle and bustle that accompanies the final few days of November slow freight movement down quite substantially nationwide. Truck drivers, tired from a grueling year on the road — or who are simply looking for some much-needed family time — park their trucks for a period.

This lull typically starts the week leading up to Thanksgiving and continues through the following 10, or so, days.

For shippers, like you, planning will be more important than ever during this two-week span. Work with consignees to schedule your loads the week before Thanksgiving arrives whenever possible.

And, in the days following thanksgiving make sure that everyone is on the same page. Many companies close on Black Friday — the day after Thanksgiving. Be sure to verify that your consignee isn’t one of them.

A Final Note About Shipping After Thanksgiving

Some years are better for truck drivers than others. For those individuals who are able to put in the work from January to November, there’s plenty of money to be made — particularly in recent history.

As a result, a portion of the national truck driver supply falls off following Thanksgiving each year when truckers decide to wrap up Q4 with a well-deserved vacation.

Spending the holiday season at home is a big motivator for some drivers and, if you’re looking to move freight in December, it might cost more to do so as the supply of available drivers — in some origins and destinations — dwindles to finish the year.

Moving Freight Around a Holiday Shouldn’t Be a Struggle

November is a superb month across the United States and around the world. With the twinkle of the holiday season breaching the horizon and store shelves full of soon-to-be “best gifts ever” there’s a lot to like about November.

Now that you understand how the 11th month of the year — a month that can be challenging without proper planning — you’re ready to tackle its 30 days head-on.

That said, the supply chain congestion and monetary risk that moving freight around a holiday like Thanksgiving presents to shippers can feel overwhelming.

And, with the largest holiday of the year quickly approaching, it’s understandable if you’re hoping to get ahead of things this time around.

Here at ATS, we make it our goal to help shippers, like you, get the most from their interactions with the transportation industry. Our article Moving Freight Around a Holiday: 3 Critical Planning Tips will help you do just that.

There’s no reason to panic, wrap up Q4 on the best note possible by utilizing the keys to holiday-transportation success, outlined here. 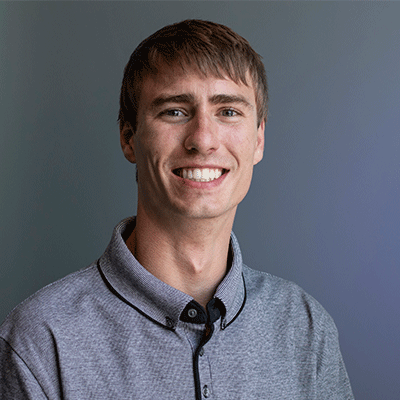