How Many Miles is a Truck Driver Allowed to Drive in One Day?

We’ve all been there before. Out of nowhere, someone needs something from you last minute. So it’s up to you to get your inventories picked up and delivered as fast as possible. But what’s a realistic amount of time you can expect your freight to be delivered?

While those of us here at ATS consider them to be superheroes, truck drivers aren’t invincible. Even they need a break from delivering the world’s goods every once in a while.

As a company that employs hundreds — and partners with thousands — of the world’s best drivers, we understand what it takes to make sure they’re safe on the road. We also understand the rules and regulations each driver faces.

In this article, we’ll break down how many miles drivers are allowed to drive each day. We’ll also provide realistic expectations about how far you can expect a driver to travel when moving your freight.

How many hours a day can a trucker drive?

Based on strict Hours of Service (HOS) regulations set by the Federal Motor Carrier Safety Administration (FMCSA), a truck driver can be behind the wheel for a maximum of 11 hours in a 24-hour period. Based on average speed — along with other factors — a truck driver can be expected to travel roughly 500 miles on average. Let's dig into the factors that lead to the answer of 500 miles.

While there are a few stipulations, here are the general HOS rules set by the FMCSA:

How Far Do Truckers Drive in a Day?

Due to government regulations, at the absolute peak, a driver can drive 11 hours in a 24-hour period. If they happened to travel 65 miles per hour (mph) the whole time, that’s 715 miles maximum.

In most cases, a driver’s day won’t be spent only on the interstate, so we can’t bank on 65 mph all day. With that in mind, we like to say 50 mph on average means we’re doing well on time. That puts us at about 550 miles if a driver is driving for 11 hours.

Let’s take it a step further now. How realistic is it that a driver is spending their entire day driving? Hint: Not very.

This means we can realistically expect a driver to be driving for about eight hours. That’s why our goal is just under 500 miles of travel a day for our drivers.

What Else to Consider When Planning Shipping Timelines

The number we provided above is our goal under normal circumstances. But if you’ve been in the transportation industry for any amount of time, you know there are many variables — plus, things don’t always go as planned. 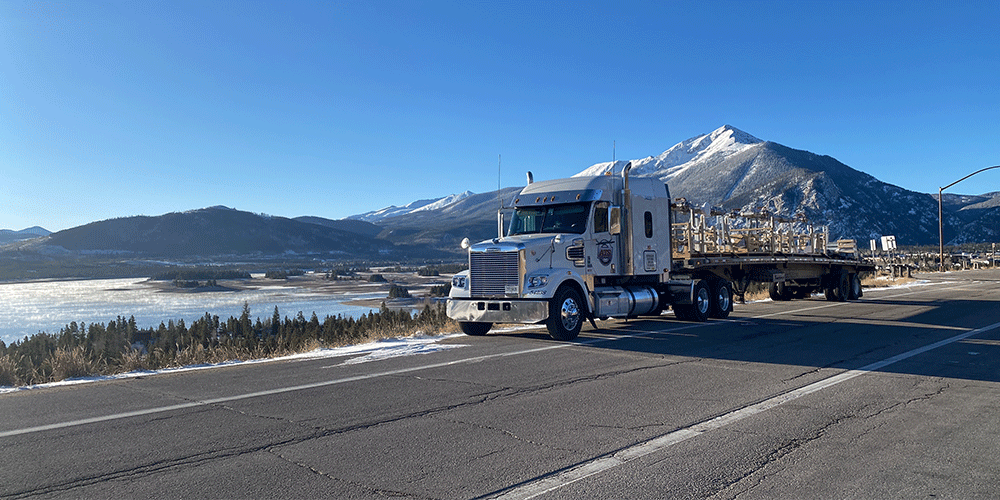 The most common factor that leads to fewer miles traveled in a day is load and unload times. Like I mentioned earlier, we plan for roughly two hours for that, but it can take longer than that sometimes. This holds especially true if you require your load to be tarped. We’ve had some tarp jobs take four to five hours to finish — which can mean 100-150 miles won’t be traveled if we’re going with the 50 mph average.

If you’re not ready for the driver at the scheduled time, that counts against the clock too. Remember, drivers can only be on duty for 14 hours and the time they spend sitting at the loading dock counts as on duty.

Another factor to consider is how far the driver needs to travel to get to the load that needs to be picked up.

We’ve found that drivers commonly “bounce” — which means driving with an empty trailer or no trailer to get to the freight — 75 miles, on average. Again, at 50 mph that’s a solid hour and a half lost to getting your freight closer to its destination.

As we know with weather, the resulting delays could be minutes, hours or even days. 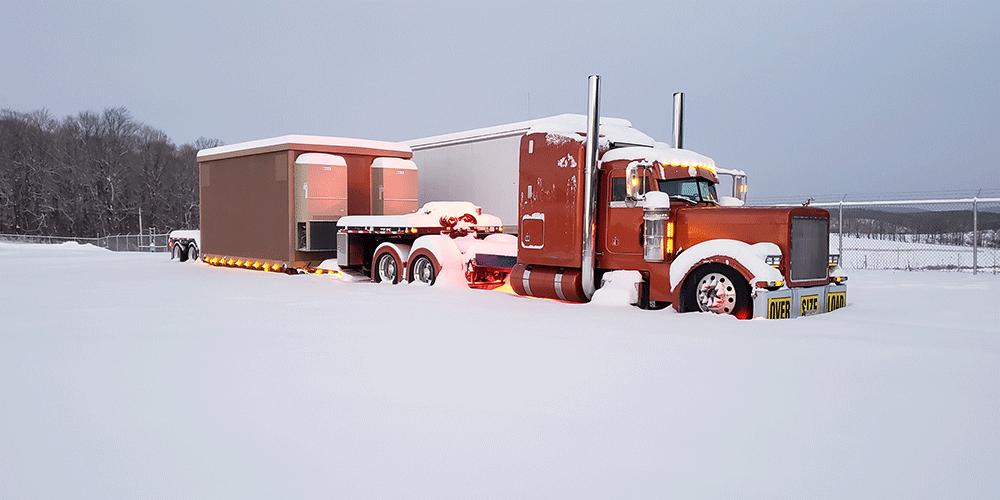 There’s a saying in Minnesota that there are two seasons here, winter and road construction. But while road construction is easier to predict than weather, that doesn’t mean it still doesn’t cause delays.

Even taking surprises out of the equation, when we know in advance about a construction project, it can still slow the driver down. Either the driver needs to be routed a different way to get around the project, if possible, or we have to plan for them to sit in traffic if an alternate route isn’t feasible.

That’s right. Where your freight is traveling absolutely plays a part in how far a driver can go in a day. A 50 mph average can be thrown out the window (please don’t litter) in the northeast part of the U.S.

From older, more compact roads to varying terrains, vehicles — including semis — can’t move as quickly. And over-dimensional (OD) loads (which we’ll get into in a bit) are a whole different animal out east with lower bridges and those compact roads.

However, traveling out west may actually improve that 50 mph average. We can thank newer, wider and faster roads for that, plus towns that are typically further apart. Drivers can travel many more miles before being required to slow down, unlike the eastern part of the U.S.

Depending on how big your cargo is, all the numbers I’ve been throwing at you so far are meaningless. 50 mph may not even be possible at max speed, let alone an average speed when the driver is hauling oversize freight.

And in many states and provinces, OD loads can only travel from sunrise to sunset — which significantly limits travel time in the winter. If we can get to 400 miles in a day with an OD load, we’d consider that a good day.

What Can I Do if I Need to Travel Further Than 500 Miles in a Day?

Sometimes, traveling fewer than 500 miles in a day isn’t an option for you. The good news is there’s a solution for that: team truck drivers.

What are team truck drivers, you ask? That’s when two drivers work out of one truck. Both have their Class-A Commercial Driver’s License (CDL) and can switch back and forth to keep moving during the other driver’s required breaks.

Team drivers make picking up in the morning and delivering the following afternoon possible.

One thing to keep in mind is team drivers don’t make non-stop driving an option. They’re still limited by the FMCSA guidelines. Remember, each driver can drive 11 hours in a 24-hour period — so we’re looking at 22 hours maximum drive time.

All that taken into account, it’s much easier to travel 1,000 miles in a day with a team. As you’ve probably guessed, a team will cost you more. While it’s not going to cost you double, you can expect it to be about 30-40 percent more than you’d pay for a solo driver.

How to Maximize the Travel Time of Your Freight

We understand using team drivers for your loads doesn’t always make sense, but there are ways you can ensure you get the most “drive time” out of the driver pulling your freight. 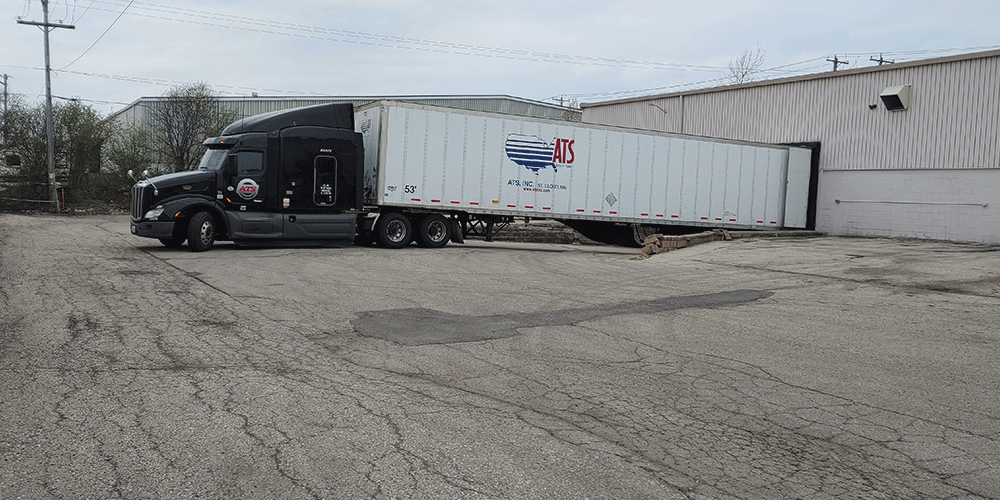 How Many Miles Can You Expect Drivers to Travel in a Day?

At ATS, we set a realistic goal of roughly 500 miles per day for a single driver, based on federal regulations and several key factors, including:

If your freight needs to move further than that in a single day, you can consider using team drivers, which will make it much easier to travel 1,000 miles in a day. But it will cost you a premium to use team drivers.

There are several ways to get the most mileage for your money. Be prepared by making sure you’re ready for drivers when they’re coming and going so there’s less waiting time. Understand your carrier’s network so you know how far a driver will have to travel to pick up your freight — which cuts into their drive time. Plan around weather events so you aren’t backlogged due to shutdowns and other factors.

Ultimately the best way to get the most for your money is to communicate. The more information you can provide your carrier in advance, the better off you’ll be.

Whether you need a load delivered locally or you're looking for someone to get your freight across the country quickly, we can help.

With a network of tens of thousands of trusted partner carriers spread throughout North America, we stand ready to provide whatever type of shipping solution you need quickly.

Contact us to learn more about our solutions or request a quote if you're ready to ship your freight.

Andrew has been in operations since he started as an intern at ATS in 2012. He’s been managing operations teams since 2015 and now focuses on supporting the logistics offices outside of the St. Cloud, Minnesota corporate office.